Eric Mounts was raised in Springfield, Ohio and graduated from Cedarville College in 1981 majoring in Business Administration. He was recognized as a third team NAIA All American basketball player in 1981 and holds several records at Cedarville. He graduated the third all time leading career collegiate scorer in Ohio college basketball. In 1982 he married his wife Andi (from suburban Detroit) whom he met at Cedarville. Andi taught physical education and coached for seven years until she had their first child. Eric went to Dallas Theological Seminary and graduated with a Master of Theology degree (ThM) in 1985 and finished a Doctor of Ministry degree (DMin) at Trinity Evangelical Divinity School in Deerfield, Illinois, in 2003. He has served in pastoral ministry for the last thirty-seven years. He served the Southgate Baptist Church as an associate for four and a half years in the 80’s before serving as the pastor of the Grand Ledge Baptist Church in Lansing, Michigan for six years, until 1995. From 1995 until 2011 he served the Southgate Baptist Church in Springfield, Ohio as the Senior Pastor. He served as the Senior Pastor at Bible Center Church in Charleston, West Virginia from March 2011 until September of 2015. In March of 2017 he began his tenure as the Senior Pastor of Calvary. Eric is the author of In His Chambers, 2017, a ninety-one day devotional experience for lawyers. Two of his other books were published in the spring of 2017, Jack: the legacy of a great dad and his family and Tell Us The Big Story: a seven lesson group study of the Bible’s storyline. Jack is a biography of his father and Tell Us The Big Story is a leader’s guide to the study of the major story line of the Bible for those new to the Bible.  Eric and Andi have three grown children. Caleb graduated from Cedarville in 2009 and married Cedarville grad and Southgate friend Emily Alexander in July of 2009. Caleb is director of IT at Ohio Valley Surgery Center in Springfield, Ohio.  They are the parents of three of Eric and Andi’s grandchildren, Vivian, Jack, and Henry. Ben graduated from Cedarville in 2011 and the Moritz College of Law at The Ohio State University in 2014. He married Lesley Wooten in August of 2014. He serves as an employment lawyer with Littler Mendelson in Columbus, Ohio. God gave Ben and Lesley a little boy, Samuel. Abbey graduated in 2013 from Cedarville with a Nursing degree and is serving children in nursing at Dayton Children’s Hospital. She married Dane Gordon, a director of marketing for R & L Trucking, in April of 2014. In the middle of COVID, God gave Dane and Abbey the Mounts’ fourth grandchild, Riley. Eric and Andi’s family is a unique source of joy in life, for which they are very grateful. 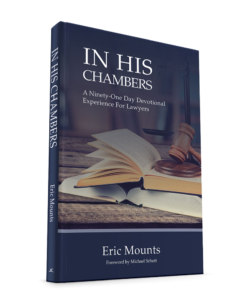 In His Chambers is a Christian devotional book for attorneys. Its readings are a GPS for a life of personal and professional legal competence.